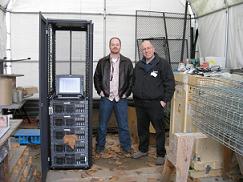 Recently there was an interesting article published in Mission Critical magazine that addressed cooling in data centers.  More specifically the article addressed the waste that is currently happening in many, many data centers by operating the center at too low a temperature.

ASHRAE TC 9.9, at the urging of IT equipment manufacturers, has been raising the recommended and allowable temperature and humidity ranges for all types of IT equipment.  There are now certain classes of equipment that have allowable operating temperatures of 113 degrees F and 80% RH...but we still see data center designs that call for 60 to 70 degree air entering the servers.  Even the most critical classes allow temperatures of 80 degrees F and 60% RH.

One of the reasons that is often presented for operating the center at such low temperatures is reliability.  There is now research that suggests that this is not a valid concern.

Using the Arrhenius model  for predicting MTBF (mean time between failure), raising the server inlet temperature from 77 degrees F to 104 degrees F reduced the MTBF from 15 years to 13 years...both probably well beyond the replacement cycle for the servers.  Given that prediction why run servers at even 80 degrees?

A second study by E. Pinherio, W.D. Weber, and L. A. Barroso’s (2007), “Failure Trends in a Large Disk Drive Population,” determined that there was no discernible relationship between disk drive failures and operating temperature.

Finally, Intel provided information to ASHRAE that allowed creation of a reliability factor calculation that was time and temperature based.  This "X-Factor" could be used to estimate changes in reliability from a baseline temperature of 68 degrees F.  The interesting thing that comes from this is that using an indirect evaporative cooling system, such as the Aztec ASC product line that can provide server inlet temperatures lower than 68ºF for the vast majority of the year, could actually increase reliability according to the algorithm.

The potential operating cost savings are huge.  Switching to the Aztec system that offers 100% outside air cooling most of the year, with supplemental evaporative cooling during the extreme highs, could save $67,000/1,000 kw of IT load for the average data center in the US...according to the information in the article.